HOW TO PLAY FLAG FOOTBALL

Whether you’re new to the game or looking to brush up on flag football rules, this guide will teach you the ins and outs of how to play flag football.

More kids are playing flag football than ever before. And we can see why—it’s engaging, inclusive, and ridiculously fun.

The best part is: anyone can learn how to play flag football. You don’t need a certain build, skill set or prior experience. Both girls and boys from 5 to 17 years old can sign up for NFL FLAG.

A flag football field is shorter than a standard tackle field at 30 yards wide and 70 yards long, with two 10-yard end zones and a midfield line-to-gain. To prevent power football in tight spaces, no run zones are located 5 yards before the end zone and on each side of the midfield line-to-gain. If the ball is spotted on or inside the no run zone, the offense must use a pass play to get a first down or touchdown. 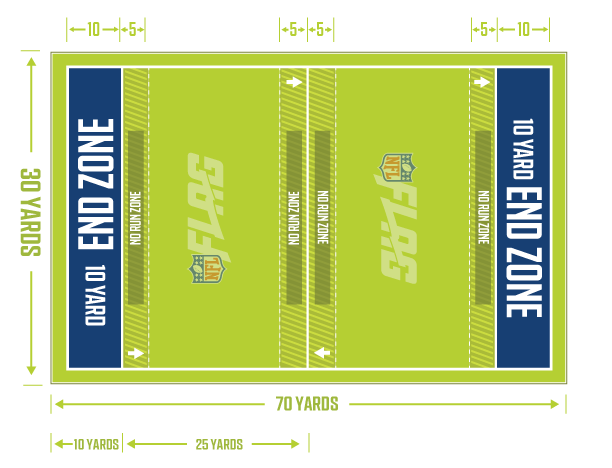 When learning how to play flag football, it’s best to start with the basics. In NFL FLAG football leagues, teams play 5 on 5 and each game consists of two halves, usually 15 to 25 minutes long. Tournament games are typically shorter with two, 10 to 12 minute halves. The clock only stops for halftime, timeouts (each team has 3), or injury, making games quick and competitive. Each player has a specific role on the field and every play counts.

The most important rule in flag football is that there’s no contact allowed, including tackling, diving, blocking, screening or fumbles. Instead of physically tackling an opponent to the ground, players wear flags that hang along their sides by a belt. Defenders “tackle” the ball-carrier by removing one or both of their flags.

While this rule is designed to keep players safe, there are several other rules that limit contact among players, including:

Every game starts with a coin toss (there are no kickoffs). The starting team begins on its own 5-yard line and has four downs—essentially four plays—to cross midfield for a first down.

If the offense fails to advance after three attempts, they can “punt,” meaning they turn over the ball to the opposing team, which then starts from its own 5-yard line. Or they can go for a first down, but if they fail, the opposing team takes over possession from the spot of the ball.

A touchdown is 6 points and a safety is 2 points (1-point conversion from the 5-yard line; 2-point conversion from the 10-yard line). A safety occurs when the ball-carrier is declared down in their own end zone. This happens when their flag is pulled by a defensive player, their flag falls out, their knee or arm touches the ground, or if a snapped ball lands in the end zone.

As a general rule of thumb, if a team is winning by a 28 or greater point margin, the game is over and the team doesn’t attempt an extra point.

When players run with the ball, their feet can’t leave the ground to avoid a defensive player. In other words, players can spin to avoid their opponent, but they can’t leap or dive.

Only direct handoffs are permitted—there are no laterals or pitches. Once the ball has been handed off, all defensive players are eligible to rush. And the person who takes the handoff is allowed to throw the ball from behind the line of scrimmage. So while you’ll see a designated quarterback on the field, several plays actually rely on other teammates to pass the ball. This changes up plays, keeps the defense on their toes, and makes the game even more exciting.

Also, under flag football rules, the quarterback can’t run with the ball unless it has been handed to him/her in the backfield. And all players who rush the passer must be a minimum of seven yards from the line of scrimmage when the ball is snapped.

Flag football rules aim to prevent power plays and avoid short-yardage situations, so you’ll find no run zones located 5 yards from each end zone and on either side of the midfield. In this designated area, the offensive team must complete a pass play.

Lastly, if an offensive player’s flag is pulled when they’re running with the ball, their feet determine where the ball is spotted, not the flag.

One rule that makes flag football unique (and that much more competitive) is that everyone can receive a pass, including the quarterback, after the ball has been handed off behind the line of scrimmage. This allows coaches to include a variety of flag football plays into their playbooks and helps players develop fundamental offense skills. Plus, it makes the game more engaging. Keep in mind that when making a catch, players must have one foot in bounds, just like tackle.

Additionally, center sneak play—where the quarterback hands off to the center as the first handoff of the play—is no longer allowed.